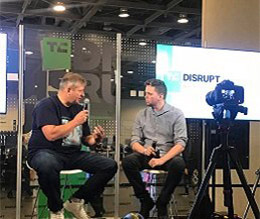 UATAG team members are always pleased to take part in tech events globally. This time, they went to San Francisco to participate in one of the most famous conferences in the technology world - TechCrunch Disrupt SF 2018, hosted at the Moscone West Convention Center. The event gathered around 9000 registrants, 1000 early-stage startups and exhibitors from all across the US and the world.

Previously, TechCrunch put out the call for pre-Series A startups and chose only five teams from each of these categories: AI, AR/VR, Blockchain, Biotech/Healthtech, Fintech, Gaming, Privacy/Security, Space, Mobility, Retail or Robotics/IoT/Hardware. UATAG beat the clock and have been selected as a TC Top Pick in the Privacy & Security category and won a free Startup Alley Exhibitor Package, which includes a one-day exhibit space in Startup Alley and three Founder passes.

UATAG  exhibited at the Startup Alley on September 6, - the second day of the event. UATAG’s booth visitors had a chance to participate in the #GlassBreakItChallenge. The rules were simple - participant had split two plates of glass with a hammer so that two identical patterns were formed. It was known in advance that it is impossible. Nevertheless, everyone who had heathen the glass with his all force received a charge of positive energy. #GlassBreakItChallenge photo report is on the UATAG FB page.

TechCrunch’s Disrupt SF is our most ambitious event ever. And one important thing is, that we extracted more insights and inspiration from this event than any before. In fact, this event was really amazing. We have received a lot of feedback about our authentication tag prototype from the attendees, and 95% of them were positive. So we can consider the possibility to scale in the US market soon. Out of all the feedback we have found potential technical partners and investors here, companies and individuals, who expressed the desire become our local representative all over the world - in the USA, Japan, Europe. We got a lot of desired contacts. We believe, people, we met at Disrupt, can help us greatly with the company business development.

Disrupt is a perfect place to meet companies alike you, investors and partners, matchmake with awesome companies and mentors. It was an amazing experience for us that brought lots of new business opportunities, bright ideas, beautiful personalities! And after all…if you are in San Francisco, the heart of the Silicon Valley, where startup dreams began.

Wrapping up the TC Disrupt, UATAG founder was interviewed on the Showcase Stage by the TechCrunch editor Greg Kumparak. The final video was published on the TechCrunch website in the Product Showcase section and its social media chanels. An interview is also available for you below. Watch, put your "LIKE" and comment.