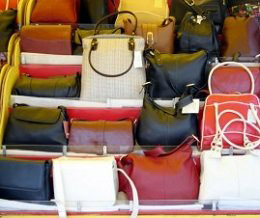 BANGKOK, THAILAND — The global trend in counterfeiting and piracy is forecast to increase during the decade with China at the heart of production of fake goods from clothes to electronics, and risky fake medicines and cosmetics. But governments and businesses are looking to challenge the commercial threats posed by counterfeiting with steps to detect fake goods and protect brands and jobs.

The February 2017 report, by research firm Frontier Economics, said the wider social, investment and criminal enforcement costs could take the total to $4.2 trillion, leaving at risk about 5.4 million "legitimate jobs". Analysts say while counterfeiting and fraud have been a part of commercial life, the quickening pace of fake products has come with the globalization of business.

A recent report by the U.N. Office on Drugs and Crime says “counterfeit goods and fraudulent medicines pose a serious risk to public health and safety”. The goods range from automotive supplies, to chemicals and pesticides, consumer electronics, electrical components, food, drink and agricultural products. While deaths and sickness have been reported from key foods such as baby milk powder in Asia, the full human toll as a result of fake mechanical, food and medicines is unclear.

China said to be at center

The UNODC and the World Customs Organization estimate 75 percent of counterfeit products seized worldwide in 2010 were manufactured in East Asia, mostly in China.

Australia-based product security firm, YPB Group executive chairman, John Houston, says the “problem [of counterfeiting] essentially is in China”. “The Chinese counterfeiter can now copy the best packaging, they actually put holograms on things that the original brand owner doesn’t have a hologram on, to create the aura of authenticity,” Houston said.

“So what you need is a traceable, identifiable, authenticable technology in products and you would be absolutely amazed how little there is in the world,” he said. The UNODC says India and China are the largest sources of fraudulent medicines, with China the lead “departure point” of nearly 60 percent of counterfeit medical products seized globally. But even as China takes steps to crack down on counterfeit medicines, “key aspects of production” are likely to move elsewhere, including to North Korea, Myanmar and Vietnam.

The major driver of the sales of counterfeit goods has come through e-commerce and major online distribution channels. In December the United States placed China’s Alibaba Group on a ‘counterfeit goods watch list’. Since then Alibaba, the $270 billion e-commerce powerhouse, led by chief executive Jack Ma, said it was taking steps to crackdown on counterfeit sellers on its network, including a digital ledger system designed to track genuine food products through a supply chain.

Alibaba also called on China’s authorities to introduce tougher laws, stricter enforcement and stiffer penalties to crackdown on producers of counterfeit goods in China. The company blamed China’s “ambiguous counterfeiting laws” that hampered authorities’ ability to build legal cases against counterfeiters. Steps by Alibaba, included the taking down of 380 million product listings and the shutdown of 180,000 Taobao stores, and 675 operators as a result of anti-counterfeiting measures.

Governments are also taking action against elements in the counterfeiting trade. Thailand regularly carries out high profile raids on counterfeit goods’ suppliers and well publicized destruction of the goods. In Cambodia, where the key health challenge is counterfeit medicines, the Interior Ministry recently said it had closed down over 60 illegal pharmacies, as well measures to curb production of fake currencies, notably U.S. dollars.

Cambodian police officers prepare to destroy counterfeit products at a dump site in Choeung Ek village on the outskirts of Phnom Penh, July 7, 2016.

In Vietnam, faced with a “tidal wave” of counterfeit cosmetics flooding the market, the Health Department of Medicine Management suspended the distribution of more than 30 beauty products. Businesses in Vietnam have also complained that fake products from China were costing the firms “hundreds of thousands of dollars each year in lost revenue”.

YPB’s Houston said there is increasing demand for technologies to thwart counterfeiting or forgery, especially with issues of cross border migration and terrorism in many parts of the world. A report by MarketsandMarkets.com said the value of anti-counterfeiting packaging is set to reach $153.95 billion by 2020, from $82.05 billion in 2015. Houston said Asian governments were looking to anti-counterfeiting technology realizing “the burden and loss of revenue that counterfeit and the black economy place on developing economies.”